skip to main | skip to sidebar

Home town dates on The Bachelor with Big Swayze. The preview suggests a full on demise for Sheena and Bettina thanks to the fam-damily. "The little hand says it's time to rock 'n' roll." (Likely the first of many 'Point Break' quotes. You've been warned.)
Overnight dates next week. I'm putting the over/under on Brad sealing the deal at 1.5. I think a dude who runs 4 bars knows how to close. Get it!? Close? It's a play on words. Ooooo kay.
Posted by LJ at 9:05 PM 1 comment:

So I found an iPhone

Dave and I return home from "30 Days of Night" and pull into Dave's parking spot in our condo complex. I open my door and find an 8GB iPhone laying face down in the adjacent parking spot.

So after I decide not to keep the phone, unlock it and sell it on eBay, I ring the doorbells of the 3 nearest condos. No answer. I then start calling the people on the recent calls list. The first dude asks me if I go to Tufts University and then eventually we figure out the phone belongs to Doug and he's vacationing in Tucson. The next guy on the recent calls list is actually with Doug and lives in the condo across from mine. He says Doug will come by soon to get the phone.

Me: "Hey, dude" as I hand him the phone.
Dude: "Thanks a lot, man" as he takes the phone and leaves.

Some random thoughts/discoveries from today.

One
I think one of the most difficult tasks in the world is trying to look cool while sitting in the bed of a truck alone when all your friends are sitting up front in the cab.

Two
I just discovered that my high school's theme song is the theme song from the TV show "High Chaparral". The ironic thing is that I didn't learn this til today even though I went to Chaparral High School and even knew the name of our fight song was High Chaparral.


Three
I've uncovered the iPhone killer: http://www.jitterbug.com/. This is a cell phone specifically built to have no features. None! One of the phones only has three buttons: "Operator", "Tow" and "911". Hell my iPhone doesn't even have those buttons! It's marketed almost exclusively to old people (as far as I can tell). This may be the most genius product I've ever known - both in terms of its intended use and its marketing.

Four
If you're flying Southwest, I really don't understand what kind of great seat you think you're getting by being the first person in line for the "C" boarding group. You don't need to stand there staring intently at the jetway as soon as they announce pre-boarding. Just hang back and relax and know you're getting a middle seat somewhere.

Six
Am I the only one that's noticed that the "UPS Whiteboard" commercials feature a song by a band called "The Postal Service"? Probably. I have some new ideas along those lines:
OK, I'm done.
Posted by LJ at 3:18 PM No comments:

It feels like it's been a long time since last week. (Yawp.) Why is that? (Yawp.) OMG I forgot this is the f'ing Hillary freak out week (Yawp.) Let's do this. (Yawp.)
Next week, the families are priceless as usual. Shots in Georgia and judgment in DC. I think it's Jenni and DeAnna, final two for sure.
Posted by LJ at 9:03 PM 1 comment:

After a 13 hour day in the car driving back from Aspen and as the D-Backs seem to be on the verge of getting swept, I dive in ... to episode 4 of The Bachelor.
Next week, against all odds, Hillary's cleavage gets even bigger! And WTF? They TELL us that Hillary leaves the show as part of the most "emotional moment in Bachelor history?" Shhhhhh. You had me at "slut", Bachelor. You had me at "slut". (Hi, Cam Crowe. "You had me at _____" jokes will never die, it seems. Are you proud or pissed?)
Posted by LJ at 9:18 PM 1 comment:

We're back after the Yankees fall and Dallas wins one of the craziest games EVER. Take that, Chris Harrison.
Next week: Love in a helicopter! Living it up when we're going doooown. Aerosmith? No? Okay. You're right.
Posted by LJ at 9:05 PM 1 comment: 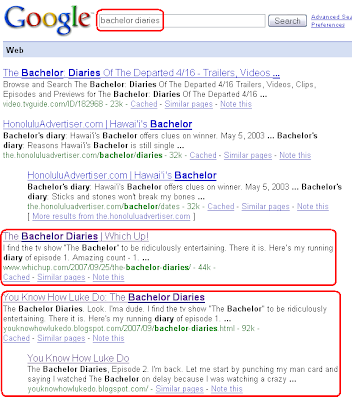 Which Up is ganking my biz! 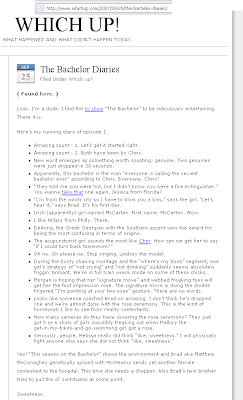 I'm back. Let me start by punching my man card and saying I watched The Bachelor on delay because I was watching a crazy 13th inning in play-in game between the Rockies and the Padres. Wow. Okay, onto more manly things like watching 15 chicks try to date 1 dude.
Looking forward to The Bachelor, Episode 3: Shock and Awe (With Twins).
Posted by LJ at 9:18 PM 4 comments:

If you're so inclined, click these and support the official Luke Johnson blog:

This is a Flickr badge showing public photos from johnsonl33. Make your own badge here.